What, where, why - the basic marionette questions answered!

If you search for information about marionettes online, you might not find many concise details. Here and there, some websites will provide an answer or two, however, finding a list of all you want to know might be difficult. That is why we decided to sum up your most asked questions about marionettes here, so you will always have a place to come back to if you are thirsty for knowledge.

What is a marionette?

Marionette is a type of puppet, usually made of wood or has a wooden structure. It is manipulated by the movement of a wooden rod with attached strings that mimic real life movements. Marionettes come usually in a form of a person, animal or a magical being. Manufacturing a marionette also requires a certain amount of skill and is much more time consuming to make than a regular puppet.

What is the difference between a puppet and a marionette?

What do you need to make a marionette?

This largely varies in regards to how advanced you are in the craft but you can easily make a simplified marionette in your own home. Firstly, you sketch your marionette and then draw it on a cardboard box. Then, using a box cutter, carefully cut the silhouette and the pieces you want to move (legs, arms, etc.). Make holes in the cut out parts you want to move and loop strings through them. Take two pens, put them into a cross and tape them together. Tie the strings onto the X shaped pencils and you are good to go! But if you would like a professional to make you one, go and check here: Custom marionette

When was the first marionette made?

Although many people associate marionettes with France or Italy, the first marionette was most likely made in ancient Egypt, as early as 2000 BC. Most marionettes at that time were made of wood, clay or ivory, and have been found in many Egyptian tombs.

When did marionettes become popular?

Specific to every country, marionettes garnered their popularity through usage during rituals or even entertainment. Sicilian marionettes had their boom as early as 13th century, many marionettes of Asian origin might have emerged in popularity even earlier, however, marionettes in theatres as we know today have not become popular until the 18th century, growing in popularity with the 19th and 20th century.

Why people use marionettes?

Historically, marionettes have been used in several rituals, religious practices or theatre. Nowadays, we use them primarily for entertainment, having dedicated theatres for their plays and dedicated puppeteer actors who work in such theatres. A marionette is a nice souvenir to bring to your loved ones, especially if you visited Czechia, as we are known to be one of the best in the craft. Don’t believe us? Check here.

Why are Czech marionettes popular?

Although marionettes have not reached our country before the 16th century, we became skilled very quickly in the craft. By the 17th century, we have made our own shops and became interested in using marionettes in theatres. The first Czech marionettes were as big as a person and used with the intent to not pay real life actors. However, with mastering the techniques, marionettes became more sophisticated and started being used as an exaggeration of real life events from our history.

To pick your own marionette, have a look at our website here: https://www.marionettes.cz/en-CZK/pop-marionettes 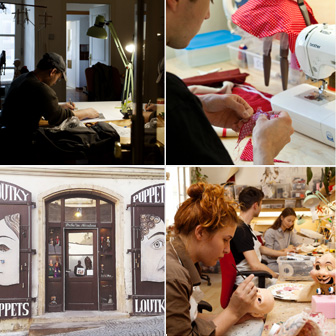